Things have finally relaxed a bit here at Hilltop. I have felt a kind of weight lifted that I didn’t even know I was carrying. It was the whole process of traveling and recording an album and all the things and people that went with releasing it. I don’t regret a minute of it, of course, but I feel more lightness now. I’m back to the earlier stages of freely composing the next project (a ballet) and just enjoying working alone in my studio for hours at a time. You can hear a mockup of the latest piece from the ballet below. Now I even have a bit more time to read a bit and get back to exercising.

The ballet opening has officially been set for the weekend of June 21, 2024 at the beautiful Morris Performing Arts Center in South Bend, Indiana. Yes, that’s 2024. My contract states that I should be done composing a year before that, in June of 2023, so the choreographer can do his work the next year. There will be 70 – 75 minutes of music, of which I expect to have at least 50 min. by the end of 2022, so I’m well on track.

Between June ’23 and ‘24, prior to the premiere, I hope to go to Europe and record a full album of this music with a large orchestra, as I did with my recent symphony. So, the ballet will not only exist as a ballet to be danced but as a concert hall ballet suite and as my next album. This is typical, just as many famous ballets are enjoyed and stand up alone as music for the concert hall and in recordings without dancers, like The Nutcracker. Crystal is already rehearsing her next show, again in the role of Cinderella, but this time it will be in Rodgers’ and Hammerstein’s Cinderella (Pull-Tight Players in Franklin, TN). It doesn’t open till December, but they are rehearsing a lot now, because they won’t be rehearsing during Thanksgiving week. As I experienced her transcendent performance as Cinderella in Into the Woods two weekends ago, I was reminded again what a treasure my wife has become over the years to so many people in the greater Nashville musical theater community. If you’d like to watch a sampling of her work, you can find it HERE.

So, today I will tell you a bit about Hilltop itself, which long- time readers know is our house, named after the home of Peter Rabbit author Beatrix Potter (hers is spelled as two words) in the Lake District of England. That is the home pictured here and on my Facebook posts announcing each new diary entry. We had the privilege to visit and tour it several years ago and loved it. See the garden greens growing on the foreground, left, for Peter to munch on; and when we were there we did see some naughty bunnies hopping around out there.

Our own garden is now beginning its natural decline, which comes with the first chills of fall. I unhooked the garden hoses in front and back and covered the spigots with those insulated covers they sell to keep them from freezing up. I put a salt lick out for the deer and in due course will refill the bird feeders and purchase some dried corn for the deer and turkeys. I’ll wait to put those out till their natural food gets harder for them to find, especially if we have a hard frost or snow. Now they have finished feasting on all the acorns that fell off of our oak trees, so they decided to feast on a couple of the pumpkins we put out as decorations by the fountain in the back (see photos)! There is one family of deer that often come as a group, which I have named the Darling Family (get it? Deer = Dear = Darling). 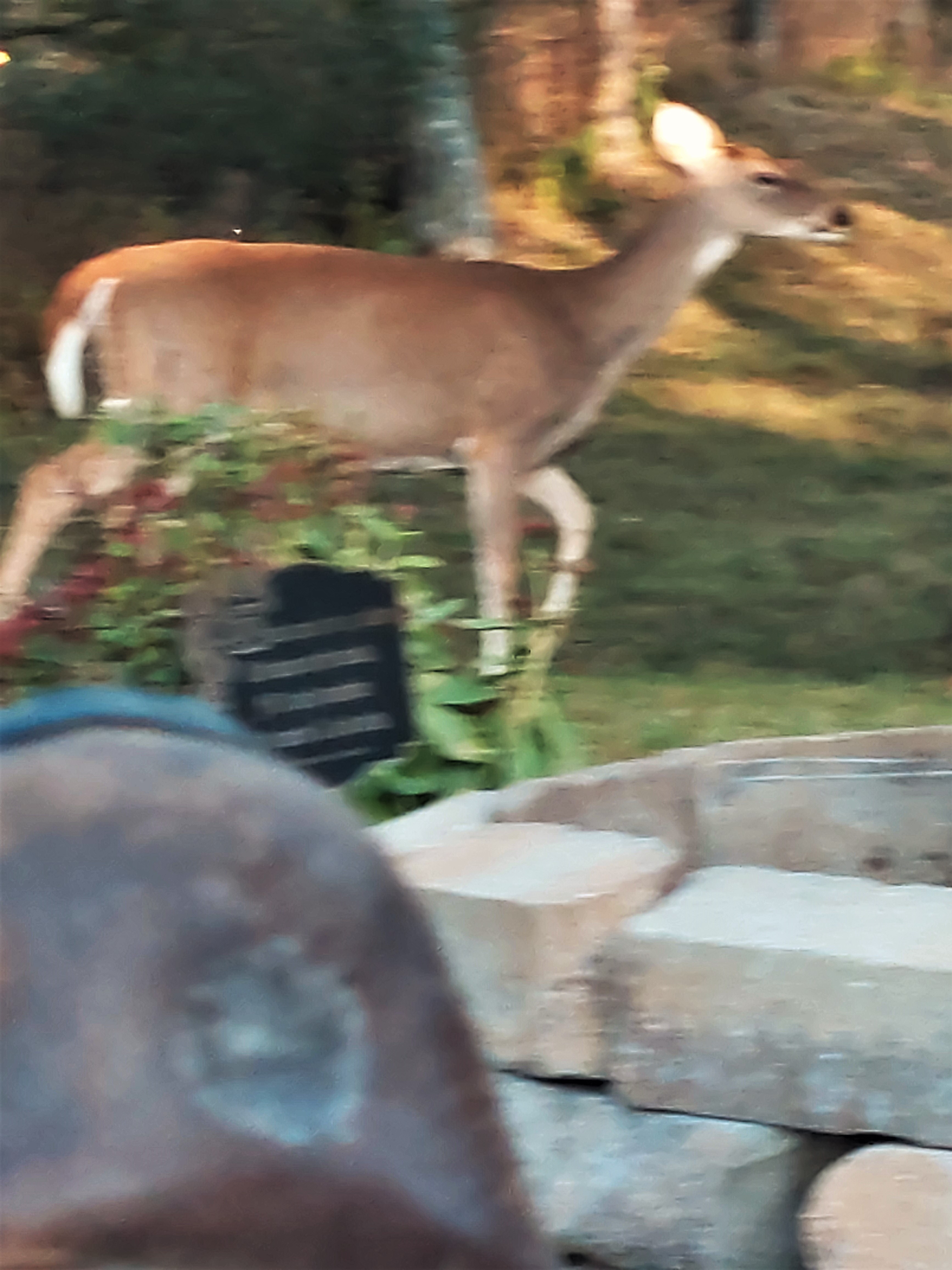 That’s my old beat-up shoe in the foreground as a doe strolls past my chaise lounge within feet of my feet, without any care or notice of me. They seem never to have acquired much fear of humans. They won’t eat out of our hands but do come surprisingly close. I’ve had many a staring contest with a senior Darling, often ending in their snorting and stomping and then leisurely walking away, having made their point.

As Anne of Green Gables liked to name places with romanticized names, like a pond she called “the lake of shining waters”, so do Crystal and I. We call the grassy hillside behind our house “the meadow.” Our treed land to the east, beyond the creek in the back is called “the enchanted wood.” And I named the creek itself “the brook.” But it’s really just a grassy, rocky drainage ditch (but “brook” sounds better). Indoors we imagine our house is our “cottage,” and what most people call a guest room we call our “spare room.” That is inspired both by one of the later Anne books and by the “spare oom” in The Lion, the Witch, and the Wardrobe. What most people call their living room is what we call “the parlor.” And what most people call their den, because it has floor-to-ceiling bookcases on one wall, we call “the libry.” (That is Crystal’s British dialect for “library.”) I named Crystal’s car Bernadette, because it is a Subaru. Her patron saint is St. Bernadette Soubirous.

We might appear to be a couple of dreamers from la la land, but all of these things are important, because creativity is not one isolated activity that you do, like composing music or performing in a musical. To do those things well, I think creativity must be a broader state of mind generally and a whole lifestyle that permeates even the most ordinary things you do. I like to think it is what justifies some of my goofy humor on Facebook.

So, here is a mockup of the newest piece I have just finished for the ballet. In this scenario, as given to me by the librettist, the title character, young Raffaella, is taken on a pilgrimage/ family vacation to Rome. They live in Italy during the Renaissance or distant past, fairytale style. For the feel of Rome with all its churches, I used a musical theme partly inspired by the Gregorian chant melody Tantum Ergo, arranged in my own neo-Romantic musical style.

I set this five-minute scene in the classical form called a small rondo, ABACA. The Chant-derived melody (A) represents their walking through Rome, complete with the sounds of church bells. Then a witch appears and with weirdly hypnotic music mesmerizes and kidnaps Raffaella (B). Then there is a brief statement of the chant melody by a solo flute, as Raffaella begins to regain her senses (A), followed by her rescue by the “Transcendent Prince” (C) in an exciting, swashbuckling climax. It culminates in a big “whack” at 3:52 where he vanquishes the witch. How he does it will be up to the choreographer. Finally, the Prince returns Raffaella to her parents, and a light, more carefree version of the chant (A) resumes and concludes the piece, as they are happily reunited. You can easily hear the above sections when they come up.

That’s all for now; see you again around November 16. I try to post about every two weeks. I will leave you with a little 26-second promo video I recorded a few days ago for Spotify to use on their Michael Kurek station in their upcoming “Wrapped” end-of-the-year ad campaign.