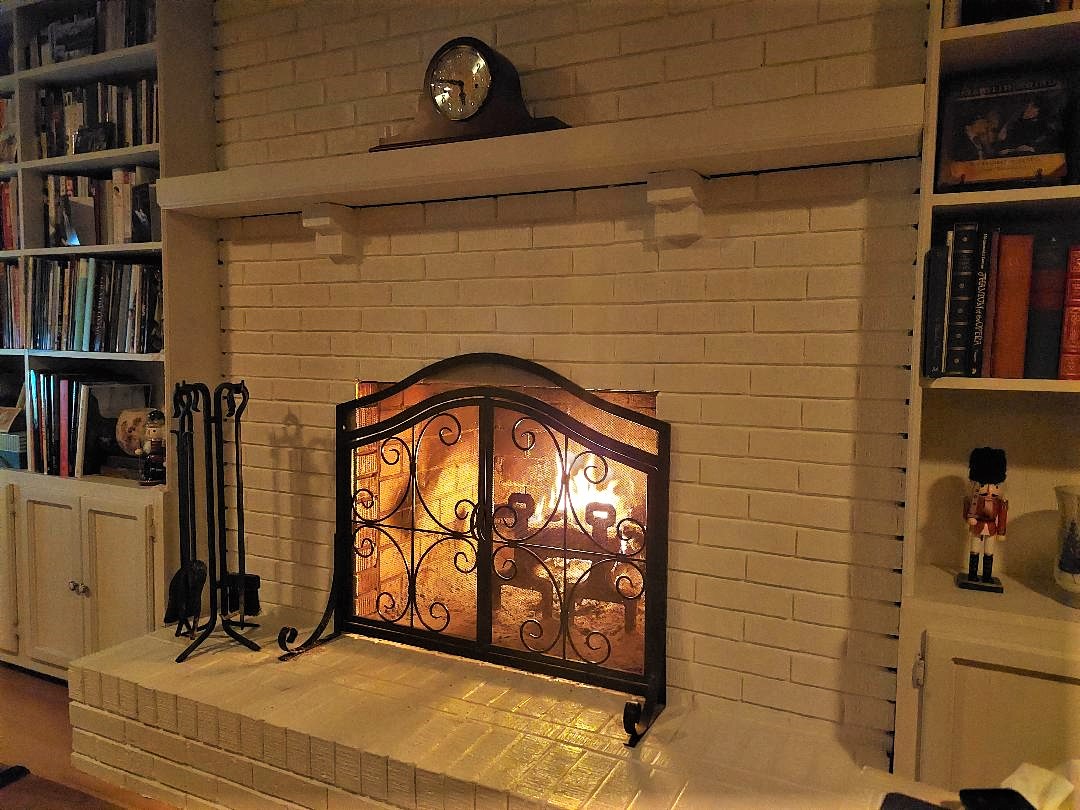 Last time, I showed you the “before” pictures of painting the primer on our raw brick fireplace. Here is the finished job. We’re happy with the end result! It’s a lighter off-white than it appears here.

In other world-shaking news, I have now lost almost 25 pounds on my diet that has been going on for months. Far too slow, but at least it’s progress.

Meanwhile, I have been working on a composition commission for that fairytale ballet you may recall from earlier posts. These are short pieces for symphony orchestra, most around five minutes long, and I have just finished a new one. It can be used by the choreographer in a lively dance scene that grows into a conflict or swordfight in the middle but returns to end in a celebratory way. For the live performance, we’ll have a full orchestra, but for now, here is a pretty realistic sounding virtual mockup of the score, below. Just press the play button below, and please use either good speakers or headphones for the full range of sound. For any music theorists out there, this piece is a study in continuous modulation through different keys, something of a technical trick to pull off smoothly, so I’m proud of that.

Btw — Yes, romantic-style classical composers like me write music that can sometimes sound like “it could be in a movie.” But since there really is a difference in the level of training and in form and technique between classical and movie music, and we do our own orchestrations (movie composers generally don’t), classical composers don’t really regard it as a compliment to say that to them! I know people mean well when they say it and do thank them. 😊

Now it’s time to wish you a Happy St. Valentine’s Day! For the ninth straight year we have sent out almost 150 of our annual Valentine cards to friends and family. Each year we pose for our photo in costume as some literary romantic couple. These have included Jane Eyre & Rochester, Phantom of the Opera & Christine Daae, Beauty (Belle) & the Beast, Col. Brandon & Marianne Dashwood (from Sense and Sensibility), Terry McKay & Nickie Ferrante (from An Affair to Remember), Captain von Trapp & Maria, and The Nutcracker & Clara. People sometimes ask who we plan to be next, but we keep a secret.

This year’s card was mailed a few days ago. It celebrates the great American author F. Scott Fitzgerald, who wrote The Great Gatsby, and his adored wife Zelda, who he called “the original flapper.” Zelda was beautiful, a brilliant force of nature and an author in her own right. As a couple, they were the toast of style and high society in both New York and Paris in the 1920’s, closely associated with Earnest Hemingway, Pablo Picasso, Cole Porter, Gertrude Stein, and many more artists and writers. They were far more party animals (and heavy drinkers) than we are, and Zelda ultimately suffered tragic mental disorders. However, we do identify with them in some ways. We are also an “artistic couple” (however less distinguished than the Fitzgeralds it may be) and together have a circle of many theatrical, musical, artistic, and literary friends.

Thanks to our friend Jennifer George for once again taking our photo! Crystal looks smashing as always. I

always joke every year that our card is really just yet another version of beauty and the beast. I am not much of a cigar smoker but the gin martini (complete with olives you can see here) and the pink champagne are real and admittedly to be found at our house of an early evening before dinner.

On that note, here are a few lovely gin cocktail recipes you might wish to try, in moderation, of course! (Apologies to non-drinkers, please skip down to the last paragraph if you wish.)

¼ cup (60 ml) gin, stirred not shaken (vodka is shaken, as Mr. Bond can tell you) with about ½ cup of ice and strained into a chilled martini glass from the freezer. Garnish with favorite olives (I like bleu-cheese-stuffed or the firmer unpitted green ones) or with a twist of lemon peel. Always hold glass by the stem, as shown here, to avoid heating it with the heat from your hand.

Mix:  ¼ cup (60 ml) gin, an optional (makes it sweeter) splash of Triple Sec or orange liqueur,  1 tbsp. (15 ml) fresh-squeezed lemon juice (to taste), 4 tsp. of the more expensive quality English orange marmalade. Shake with ice in a shaker and strain into a chilled martini glass (no ice). Garnish with a twist of orange peel or lemon peel.

Shake with ice ¼ cup gin and 1 ½ tbsp. triple sec (orange liqueur), 1.5 to 2 tbsp. lemon juice (to taste), pinch of caster (fine) sugar (to taste). Pour into chilled martini glass and top with one lightly beaten (just into a foam, not stiff) egg white, to float on top. Most people shake the egg white with the drink and let it float to the top. I do it separately. Try it both ways.

I will close with this motto, which I learned from one of my mentors, the late, great composer and conductor Lukas Foss, who on a walk with me once stopped, was silent for a moment, then thoughtfully told me: “You know, Michael, time flies like an arrow. Fruit flies like a banana.” 😊