It has been six weeks since my last entry, because I was waiting for some things to firm up before writing again. Some of them have, and some still have not, and others have dissolved altogether!

Crystal’s musical theater run of Matilda just completed, and it was very special. What a fine cast, and what a charming show! I was able to attend ten of the performances and enjoyed each one more than the last. She will have some auditions in the coming weeks, and I’ll post any results.

In regard to the local production of my show, Dear Miss Barrett, scheduled for this month in Nashville, we got as far as auditions, call-backs, and picking a cast before there was apparently a financial crisis that necessitated the cancellation of all the remaining shows this season at that theater, including mine. This sort of thing happens in the arts, as fragile as their funding often is. It has certainly happened to me before in my home field of classical music, so I take it in stride.

Meanwhile, another Nashville theater, having heard about the above situation, has indicated an interest in the show and is reviewing the script, and I still await word from an out-of-state theater about a production of this show that they have been considering; it was proposed by one of their board members, who remains optimistic.

All of the theater stuff is rather “on the side” for me, in any case, and my main life as a classical composer (and more recently as a fledgling author) goes on. Dates have been set for recording my symphony and other works next year, the contract signed, and finally all the funding is now in place!  I have worked out a plan with the three conductors, recording engineer, and Parma Recordings, and still have to compose the fourth movement of the symphony. That will occupy me full time, beginning in May. They will be getting underway on the liner notes and art work for the CD, in the mean time. 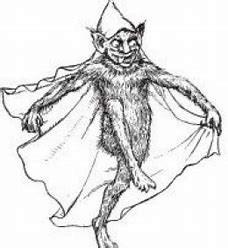 My new fictional novel, keyed to the symphony in many ways (and sharing the title “Tales from the Realm of Faerie” with the symphony’s subtitle), is well along. I have written a dozen chapters, thirty-five thousand words, which is more than a third and approaching half of the novel, which will be eighty to ninety thousand words. My last book, The Sound of Beauty, was sixty thousand words. My publisher of the latter, requested and is reviewing what I have done so far on this new book, which ideally will be bundled and marketed along with the CD by the record company. The novel is written in the tradition of Tolkien but with a musical emphasis. That’s as well as I can describe it, for now. It’s full of wonderful creatures like this one.

Finally, at school we have now hit the start of our spring break and are halfway through my final semester of teaching before taking my voluntary early retirement from Vanderbilt, in order to work full time on all the above projects and a ballet after that, plus some online teaching as a further income supplement. I’m starting nostalgically to count the “lasts” – This is the last time I’ll do this activity or grade that assignment, and so on. It is a good semester with only two small classes and a handful of good student composers in private composition lessons, all done in ten hours of teaching a week on Mondays, Wednesdays, and Fridays. Only six weeks, or sixty hours of teaching remain. Wow.

I am more of a summer person than a winter person and eagerly await getting outside to do some gardening, to clean and start the fountain, mow, and plant the flower boxes. All the bulbs are already coming up in the front. At this time of year we never know if we’ll still get another freeze or even another snow, but I’m hoping that spring is now here. The ten-day forecast shows us in the 60’s (F), which should get us beyond any more freezes, we’ll see. Next week brings Daylight Saving Time, and I have made my Lenten resolutions. Wishing you good spring days ahead, too!  Later this month, I’m taking Crystal on a “mystery trip” during her spring break from Thursday through Sunday. I will only have to miss one Friday of teaching, myself. She knows we’re going somewhere, but doesn’t know where; all the reservations have been made. (She will like it.)

This time I’m going to share one of my favorite British Idyll type pieces, the truly lovely “On the Banks of Green Willow” by George Butterworth, who tragically (for music) lost his life around age thirty in a World War I battle at the Somme.